What does my family have against sleep, anyway?

One of the many great things about homeschooling is that there is some flexibility in your schedule.  The kids don’t have to get dragged out of bed at 0-Dark-Thirty to make it to school on time, so it’s OK to stay up a little later on occasion, and simply sleep in a bit.   This is a tremendous blessing for everyone in the house except the guy who does have to get out of bed at 0-Dark-Thirty to get to work on time.

That, of course, would be me.

I get up silly early, so I try to get in bed at a reasonable hour.  I know what a reasonable hour is, because after that point I become unreasonable.  I start to think only in terms of how many hours remain until I have to get up.  I never used to do that; it’s got to be an age thing.  Anyway, I say things like:

“Are you still flossing your teeth?  Do you have to do all of them? Don’t you realize that I only have five hours and thirteen minutes left to sleep?”

Yes, I’m ashamed to say, there are times when I would gladly sacrifice my children’s oral health for a few more minutes in Dreamland.  But they’re not innocent in all of this—I know for a fact that they stall sometimes, just to make me twitch.  Or—and this is a favorite amusement—they wait until I call them for the 85th time, then say, “Oh, we’ve been ready for bed for half an hour.  We were waiting for you.”

They’re so cute when they do that.

Come to think of it, sleep has been an issue for me since the twins were born.  Within about four minutes of entering the world, my kids made two important discoveries:

They were brilliant, if brutal.

Of course, Cathy had to bear the brunt of this, because she was with them all day.  I tried to help out when I got home from work, but I was only marginally effective, since I was usually still worn out from the night before.  The babies and I would sit up watching late-night television classics, such as “The Home Knife Show.”  Did you know that there is (or was in 1998) an entire infomercial dedicated to edged tools and weapons?  Furthermore, did you 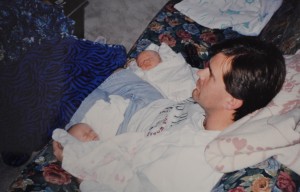 know that they run this show long after all rational folks are in bed?  I find that disturbing, and I probably would have spent a lot of money, except that I couldn’t reach the phone with a baby in each arm.

In the years between then and now, I have fuzzy memories of being stretched out on the floor between two cribs, one arm jammed through the slats of each crib, holding tiny hands while the circulation slowly shut down and all feeling left my extremities.  It was pure, unadulterated joy…but it did leave scars—and not just on my arms.  It made me a napper.

I have a beautiful chair, about which I will tell you someday, if you care to listen.  For now, all you need know is that it is in this chair that I ponder the great mysteries of life, with my eyes closed and my breathing deep and regular.  I figure that every minute of dozing in that chair reclaims a minute given to beautiful children who were wide awake at three a.m.  I expect to catch up within the next twelve-to-fourteen years.

The original title of this post was “Family Worship,” because I had planned on talking about our family’s bedtime prayers.  The concept of bedtime naturally led to the idea of sleep, and the lack of it, and it seems I have wandered off on a bit of a rabbit trail.  Unless, of course, my subconscious is trying to tell me that I worship sleep.  This is entirely possible, entirely plausible, and not something I want to think about at this time.

I’m left with two choices.  I can erase all this, or change the title.  New title it is.  Do me a favor and come back in a couple of days for the next post.  It’s going to be some great family tradition talk.

Now?  I should write about it now?  Don’t you realize that I only have four hours and forty-two minutes before I have to get up?

It seems that my reasonable hour has come and gone.