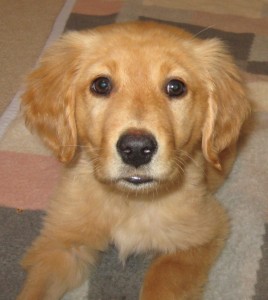 My dog is defective.

O.K., from the beginning…

When my son turned twelve, we got him a puppy.  He had wanted one since he first learned what dogs were.  I thought it was a great idea, as I grew up in an apartment and never had a dog of my own.  My bride, who grew up in a house full of dogs, was less excited about the idea.  Still, she loves her son, and was willing to sacrifice her garden, her carpet, and the structural integrity of her house to give him that “a boy and his dog” type of joy.

Along came Amanda Holly, a sweet, adorable Golden Retriever puppy who ate her own poop.  When Alec first came into the room and saw her, he got a glazed look on his face and uttered, “It’s a dog.”  He said that about eighteen or twenty times, to the point where I was beginning to wonder about the gene pool again.  Finally, he seemed to settle into the idea.  He was now, forever, a dog person. 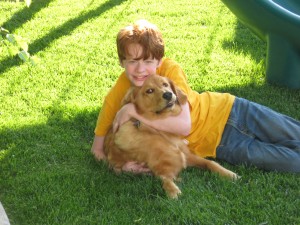 A Dog and Her Boy

Things were great for months, except for the poop eating part.  Mandy is an incredibly well-behaved dog, except for, well, you know, and we all fell completely in love with her.  Then she began to limp.

All of a sudden, our six-month-old puppy was hobbling around the house like a canine octogenarian.  Of course, I took her to the vet, which I financed by selling several small pieces of furniture.  And that’s where I learned something very amusing.  Golden Retrievers, it seems, are prone to a condition called hip dysplasia.  Hip dysplasia is a medical term which means that your dog is defective and you are about to go into serious debt.

Major, multi-thousand dollar surgery for a dog.  A beautiful, sweet, loving, poop-eating dog that my son has bonded with for life.  I’ve gotta tell you, the temptation to take her on a long, one-way hike in the woods was tremendous.  After all, how do you justify spending that kind of money on a pet?  In our home, I’m responsible for my family’s financial health, and going several zeros into debt hardly seemed like taking care of my family.

But then, you see where I’m going, don’t you?  This little dog had, in fact, gone beyond pet to become family.  Oh, for crying out loud.

So off we went to the specialist, who cut my son’s dog into pieces, and then sewed the pieces back together.  She lived in the family room for weeks, sleeping on her pillow with her Frankenstein leg all shaven and scarred and scary-looking.  We half-carried her out to go to the bathroom, and I hoisted her up the stairs at night so she could sleep in her boy’s room. 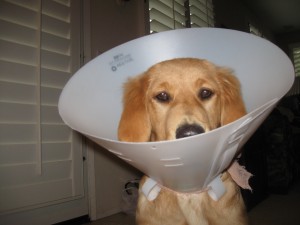 Slow for the Cone Zone!

And, slowly, she healed.  Now she goes on hikes, runs like a crazy dog, and continues to eat what she has already eaten.  Like I said, some things are genetic—some are choice.

Family is family.  When you’re a dad, you take care of your kids, no matter how many legs they have or what kind of snacks they prefer.