I’ve been meaning to write this for a while now, but I keep putting it off…

You are supposed to be reading, right now, right here, the announcement of my new book.  It is, in fact, complete, though I’ll admit it’s a bit late.  You see, my book is a devotional for Thanksgiving, and here we are only a week out from the holiday.

The devotions are scheduled to start this Sunday.

Except you don’t have it yet.

Because I haven’t put it out yet.

Because I’m still waiting for a cover.

I had planned to hire out the artwork for the cover, because I wanted it to look all snazzy for you, my fearless readers.  I kept meaning to do it, but I was too busy with the other parts of the book, and the rest of life.  Besides, I had plenty of time.

Until suddenly I didn’t.

So now I wait, teeth gnashing, thumbs a’twiddle, while any real chance of selling this puppy goes right out the window.

I’d like to say that this is the first time I have ever put off ‘till next month the thing I should do today, but we both know that isn’t true.  I was born late, and my situation doesn’t seem to have improved much over the years.

I can’t count the number of times I sat up frantically on a Sunday night, trying to finish the essay that was due Monday morning.  It doesn’t matter that the teacher gave us two weeks to write it—I would probably be finishing it on my walk to school, pausing from time to time to use the sidewalk as a desk.

And that was in college.

You, know, I feel the need for a little confession time.  Let’s just get it all out there in the open, shall we?

Great Moments in Procrastination by Michael

I lived close enough to my elementary school that I could hear the bell ring from my living room.  If I wanted to—and I always wanted to—I could watch I Love Lucy until I heard the first bell, then run like a maniac.  I usually made it, but it left me with a perpetual twitch.

In the fourth grade, my teacher wanted us to sew a patchwork quilt.  I guess this assignment fell under “Enrichment,” and this was obviously before State Standards.  Anyway, we had about an hour a day devoted to measuring, cutting, sewing, and tying.  I spent my time wandering, visiting, hiding, and chatting.  I finally finished the quilt—but not that school year.  When I finally went back to show it to my teacher, she said that she liked it…and my beard. 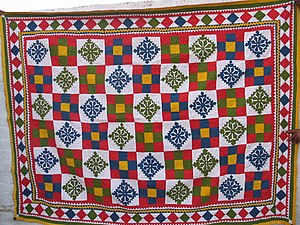 I had the opportunity to go to Yale.  I missed the application deadline.

I waited too long to choose housing at college, and ended up sharing a “sleeping porch” with fifteen other guys, along with their various sounds and smells.

I wrote the poem I used to propose to my wife—perhaps the most important thing I’ve ever written—in the bathtub two hours before proposing.

I once wrote an ebook about Thanksgiving, but waited so long to order the cover that…oh, you’ve heard that one.

There are two interesting byproducts of my procrastination fascination that I just got around to noticing.  First, I am pretty good in a crisis.  Having caused so many in my personal life, I have had plenty of practice in handling them.  Second, I seem to be brutally intolerant of anyone else’s procrastination.  In my classroom, I do not allow any late work whatsoever.  In my home, I get rather severe if the kids are slow in getting ready—for bed, for church, whatever it may be.  I wonder if there are some deep-seated psychoemotional forces at play here that I need to explore.

I’ll have to look into that.