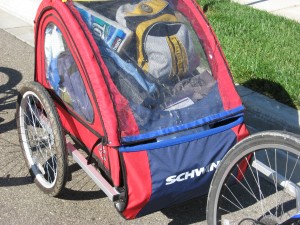 The trailer of despair

Note: This is, as you can read from the title, part three in a series.  If you’re just joining us, may I suggest that you go back and read parts one and two?

The unendurable teaches you endurance—or leaves you broken and weeping by the side of the road.

So, I forgot to replace the tubes on the trailer.

“Why?” doesn’t factor in at this point.  Of course it was obvious.  Have you ever watched a sitcom on TV, and seen the character doing something disastrous, and yelled at the screen for him to stop?  Never works, does it?

We were back on the road.  Our little detour had cost us about three hours and ten additional miles of pedaling.  It was now midafternoon, and I began to struggle, going up a steep hill.  Except we were on flat ground.  Alec looked down and informed me, “Dad, the trailer has a flat.”

Five additional patches applied over the course of three miles got the leak slowed, but I still had to stop every mile or so to pump.

Depressed yet?  I was nearly catatonic with despair.  Especially when the map turned out to be ever so slightly incorrect.

With darkness encroaching, we came to the place where our camp should be but wasn’t.  The park was clearly marked on the map.  The “Road Closed” sign was clearly marked in front of us.  I sat there stunned for several minutes, trying not to let on to my eleven-year-old boy that I was about to lose it.  I think he could figure it out pretty well.

And there, sitting at a dead end, lost, exhausted, in the dark, with a flat tire and about a teaspoonful of hope, I heard my son take a giant step towards manhood.

“Wow,” he says to me.  “God sure planned the right day for this to happen.  Just think—if all this had happened yesterday, we probably would have given up.  Instead, yesterday was great.  If this had happened tomorrow, we probably would have been too tired from all the riding to get to Grandpa’s.  He let it be today—the shortest day on the schedule—so we have the energy to make it.”

It is strange and wonderful for a father to be humbled by his son.

We had two options—backtrack, or turn right, pedal along, and pray.  We took option two, and found ourselves at a stoplight a mile down the road in the merciful hands of Bob and Ginger, who saw us pumping yet again and stopped to help.

Bob and Ginger knew where the park was.

Bob and Ginger had a truck.

I had to exercise a little Dadly authority here, because Alec absolutely did not want to take a ride.  To him, if we didn’t ride every foot of the road between our house and Grandpa’s we wouldn’t really be achieving our goal.  I explained to him that when God sends you help—and Bob and Ginger were certainly that—you don’t refuse it.  That is where perseverance becomes pride.  He accepted it, though he didn’t like it—another step towards Manhoodville.

As it turned out, the mistake in the map had led us beyond the park.  The ride we accepted from the delightful Bob and Ginger was backtracking.  Which means that, in the end, we got to ride every foot of the road to Grandpa’s house…and then some.

In the meantime, however, we’re still on Day Two…and it ain’t over yet.

Come back Monday. I promise to finish the story—we’re just about to the skunks.