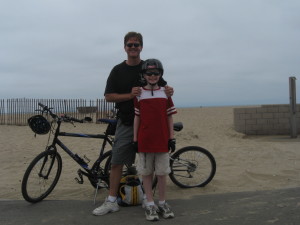 Note: This is Part Four of a series.  Wouldn’t it be a kick to go back and read from the beginning?

But not skunks.  Skunks always win.

Bob and Ginger graciously dropped us at the park.  It was late—our five-hour jaunt had turned out to be a twelve-hour odyssey.  We found our campsite by flashlight, and Alec fixed PB&J’s while I set up the tent.  The kid was amazing.  No whining or complaining.  He joked about how he felt like Job, and how his shield (of faith) arm was getting sore.  I can only find fault with one thing.  As soon as he hit the tent, the boy was sound asleep—leaving his old man to face invasion alone.

They came out of the night like big furry locusts.  It had been too dark to find the trash can, so I had put our trash in the fire pit, figuring to clean it up in the morning.  The smell of peanut butter brought vermin from every corner of the galaxy.  Little rat-things, raccoons, skunks—it was like being in a Brian Jacques novel.  Some flashlighting and grunting (I was trying to sound like an annoyed bear) scared most of the creatures away.  The skunks ignored me completely. 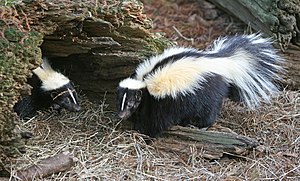 We had seen several skunks as we looked for our campsite, so I had carefully stowed our food in the bike trailer, thinking that a little lightweight canvas would stop the Smelly Rodents from the Pit.

I should have just declared, “Tap tap, our food,” or, “Swiper, no swiping,” for all the good it did.

About 2:00, a distinct “scritch” pulled me awake.  Looking out the flap of the tent, I saw our trailer doing a little boogie dance.  A black and white tail was clearly visible in the starlight, sticking out of the top.

That little skunk butt was no more than six feet away, and aimed directly at our tent, sleeping bags, clothes, and persons.

“Alec,” I said quietly, shaking him awake, “There’s a skunk right there. Wanna see it?”

Something primal and stupid rose up inside me.  I had endured flat tires, bad maps, and endless miles of pedaling.  I was not about to lose our stuff to skunk nasty.  Creeping softly from the safety of the tent, I made my way around to the far side of the trailer.  This way, if Pepe le Pew cut loose, it would be away from the tent. (You’re welcome, sleeping son.)  I raised my trembling hand and gave the trailer a determined shove.

The skunk poked his head out, cocked a warning eyebrow at me, and returned to eating my bread.

Something deep within me snapped.

I hauled off, kicked the trailer, and dropped into the fetal position.

Pepe flew out from under the canvas and fled to the brush.

Victorious, I spent the next several minutes cleaning half-chewed, skunk-slobbery bits of bread from the trailer.  I hucked the entire sticky mass as far out into the wilderness as I could.  Let Pepe have his spoils—the castle was mine!

Collapsing onto my sleeping bag, I took a peek at the clock.  It was now 3:10 a.m.  Day Two was finally over.

We awoke at about 6:30 with some significant needs (besides more sleep).  We still had 50+ miles to ride, our clothes were dirty, we stank, and my bike had a flat (so much for the nuclear-bomb-proof tubes).  All of that was fixable; the big problem was that we still had a swiss cheese inner tube on the trailer, and no store within at least six miles.

We prayed and went knocking on doors.

At the second RV we approached, we met Bob and Ginger’s fellow angel.  I saw kid bikes, and one of them had the same sized tires as our bike trailer.  I spoke to their Dad-Man, and asked if they had a spare tube I could purchase at an outrageous price.  He immediately gave me—no charge—the tube from his child’s bike.

Day Three offered no calamities—just miles and miles of miles.  I kept thinking that I had a flat, or that something was unbalanced in the trailer, because it was getting so hard to pull.  I finally came to the conclusion that the equipment was fine; it was the man who was fading.

We made it.  One hundred thirteen miles from our door to Grandpa’s.

Alec and I learned a lot from that trip, things both practical and spiritual.

For Alec, I think the biggest lesson was how good it feels to set a big goal and achieve it.  That lesson is helping him to grow into a fearless man of God.

For me, the best lesson came from watching the son of my heart thrive under difficult circumstances.  It reminds me that, as a Dad-Man, it’s my duty to challenge him and give him opportunities to prove himself.