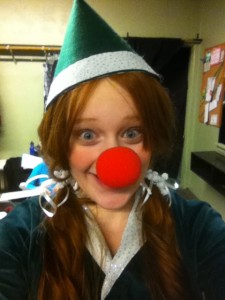 This is sucking up the entire holiday season.

I knew it would happen, so I shouldn’t complain—but where’s the fun in that?

Cathy and Carissa have made it through the rehearsal time, and Miracle on 34th Street has officially opened.  I am the proud husband of Pedestrian #1, and proud father of an elf.

Pardon me, not just any elf…Elf J.

So the final rehearsal week just happened to coincide with this little family tradition thingie we have.  We call it Thanksgiving.  Monday night, Tuesday night, Wednesday night—Thursday off for the holiday—Friday night and Saturday morning were tech and dress rehearsals.  Saturday night they opened, following up with a Sunday matinee.  During this time they were, frankly, useless to me.  They entered, ate, slept, walked around in a zombie-like state, frantically did various things with makeup and hair, and raced out the door.

I can expect this every Friday, Saturday, and Sunday through the end of December.

Over and over again.

While I do the dishes.

And watch my entire holiday season being sucked up.

I suppose I shouldn’t complain—life isn’t all about me…but this blog is.

A moment for self-pity…

Frankly, I have to say that through all this my bride has impressed me like nobody’s business.  This whole experience is way out of her comfort zone, but she’s doing it.  Don’t get me wrong—Cathy is a very talented lady, but she hasn’t done this kind of thing before.  Mainly because she hasn’t wanted to.  Besides, she is kind of the shy type—her husband is the loud and obnoxious one in the family.  So, the idea of getting up in front of all those people and playing a character is really uncomfortable for her.  Not to mention getting to share a dressing room with a whole bunch of people.

Why is she doing this?  Why put herself through all this stress when she is not even a theater freak?

Carissa, as I’ve mentioned before, is a bona fide drama queen.  She lives for this stuff.  She would audition for every play this theater put on, if we would let her.  But she has a pair of nosy, over-protective, won’t-let-her-hang-around-the-theater-until-11PM-without-a-parent types at home.

So, we’re stuck.  If we want her to explore her gifts, the talents that God has given her, then we have to find a way for her to do it.  We are blessed to have a faith-based theater so close to us, where we can know that the scripts—and people—are basically clean.  But the theater is not her Dad; I am.  There still needs to be someone there, someone to take responsibility.

As a teacher, I have seen parents err on both sides of this issue.  Some give their children too much freedom too soon, and the kids run headlong into stupid choices that parents should have kept them from.  I have also seen parents coddle children so that they never learn to take responsibility for their own actions, their own choices.  I don’t want to be either of those parents, so I try to strike a balance, knowing I will fail, and praying God’s grace over my children.

How do people even try to parent without Christ?  If I didn’t know I had His forgiveness for my daily…meness, well, there wouldn’t be enough therapists in all the land.

Pardon me…I’d love to ponder the practical problems of proactive parenting in perpetuity, but I’ve got dishes to do.