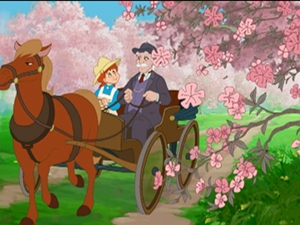 This time, it’s a family adventure.  Of sorts.

If you’ve been reading for a while (bless you) you know that my family has gotten somewhat involved with a local community theater.  Carissa and I were part of their production of The Sound of Music, which sucked up our whole summer, and Carissa and Cathy got to be in Miracle on 34th Street, which sucked up our entire holiday season.  Alec and Carissa are learning to do tech, and, well, let’s just say the drive to the theater has become quite familiar.

Now cometh Anne of Green Gables, a musical based on my daughter’s all-time favorite story.  She can quote Anne Shirley—and she does, whether we ask her to or not.  She has the red hair, she has the imagination, she has the spunk—you might as well call her Anne, or perhaps Cordelia.  I would have been #1 on the Rotten Dad list had I not allowed her to at least audition.

Now, you may remember that when the girls did Miracle on 34th Street, it was with the understanding that the next audition would be for all four of us.  Family togetherness, and all that.

So, off we troop, the Burns Family goes auditioning.

Preparing for an audition is no easy feat.  First, one must pick a song.  I have threatened to sing the theme from The Love Boat for several months; Alec encourages me, Carissa threatens to move out, and Cathy just rolls her eyes.  I tell you, one of these days I’m singing that song—‘cause I can sell it, Baby.

Having picked a song, one must prepare and rehearse.  This is not as simple as it sounds, because in my home no one wants anyone else to hear them singing.  Bedrooms, garage, closet—all become rehearsal halls.  Why, you ask, do they not want to be heard rehearsing?  After all, you say, they will have to sing in front of people at the audition, won’t they?

Ask not for logic.  We are theater people.

At long last we come to the anointed, appointed audition day.

Finally, the hardest part is just beginning.  Because now we have to wait.

In my family, there is nothing stoic about waiting.  We are manic waiters.  It doesn’t help that there are about two decades between the auditions and the announcement of the results.

Oh, it’s only two weeks?  Are you sure?  Because it feels like it’s been a month already.

Frankly, the problem rests with the Daughter of My Heart.  The rest of us are easy.  We will be happy with any old part, no matter how small.  As for me, if I can best serve as an audience member, so be it.  My heart will go on.

For those of you keeping score, that last statement is roughly 40% maturity, 25% graciousness, and 35% laziness.  These shows are a lot of work.

For Carissa, it’s different.  This is not just any show.  This is

So, here is my job as the Dad-Man.  I need to provide what I call tempered encouragement.  Do I want her to get the part?  Sure.  Do I think she has a shot at the role?  Absolutely.  Are there other girls who would also do a great job and, for a variety of reasons, might get the nod?

This is tough stuff, either way it goes.  If she gets the part of Anne, it will be the most demanding thing she has done—seriously challenging.  If she’s not up to it, she could disgrace the family name, forcing us to move to a place of seclusion and get our appearances surgically altered.

If, however, she doesn’t get Anne, it will be her first seriously major disappointment.  This is the kind of thing Dad can’t fix with duct tape and power tools.

So, my little girl is learning to have faith in God.  She has to believe that he really does know what is best for her, for the show, for our family—and that he cares.  She has to trust that if he calls her to this part, he will equip her for it, and that if he doesn’t, it is truly for the best.

As for me, I have to learn to deal with a simple, brutal fact.

If my family gets cast in this show, it’s going to suck up our entire spring.